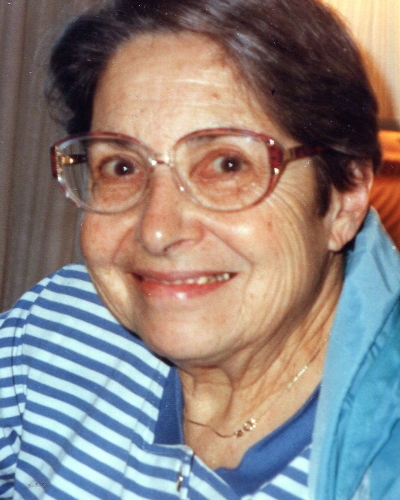 Estelle was 98 years old. She was born on September 9, 1923, in New York City, to Moses and Rachel Leah (Witkoff) Binder. She was always a proud New Yorker, but enjoyed her life, family, and friends wherever she lived. Before retiring to Beverly Hills, FL, Estelle resided in Dayton, OH, from 1953 to 1986.

In Dayton, she dedicated herself to raising her children, making good friends, participating in several social organizations, and eventually returning to work as a legal secretary. She was a voracious reader, especially of murder mysteries and science fiction, became a tough-to-beat mahjong player in retirement, and showed astonishing speed in finishing crossword puzzles, all of which reflected on Estelle’s inquisitive mind that, along with her compassion for others and gregarious nature, was what everyone said about her.

Estelle was preceded in death by her husband of more than 65 years, Benjamin, in 2012, and by her daughter, Ellen Mara Rosengarten, in 2004. She is survived by her sons, Andrew (Terrace) of Charleston, WV, and James (Carol) of Raleigh, NC; son-in-law, Samuel Rosengarten of Beavercreek, OH; and six grandchildren, Rachel, Michael, and Caroline Rosengarten, and Sarah, Jacob, and David Nason. She will be missed by her family and friends.

In lieu of flowers, please send donations to the Kanawha County Public Library or Legal Aid of West Virginia.