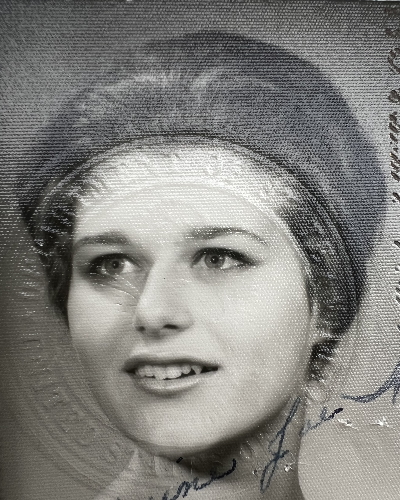 Katherine Jae “Kitty” (Spears) Cooper passed away peacefully in her sleep at her home on Friday, October 28, 2022, with the family pet Cavalier Spaniel, Scarlett, curled up beside her. Kitty was born on November 24, 1947, in Lexington, Kentucky, the daughter and first child of Jae Spears and Lawrence Spears. Kitty was soon joined in the Spears household by her sister, Marsha, and brothers Lawrence “Larry” and James “Jim.”

Kitty frequently talked about what she considered to be her “fairytale life” growing up. Her father, Larry, was a pilot and career officer in the United States Air Force. As a result, the family moved every few years with residences in places such as Japan, Oklahoma, Tennessee, West Virginia, and England. The frequent moves contributed to the family being very close as they had to leave old friends behind and make new friends at the new location. Kitty attended high school in England through her junior year. At that time her father retired and the family relocated to Elkins where they had previously lived for a few years. Kitty graduated from Elkins High School and the next year she attended Prealpina, a boarding school for girls, in Switzerland for one year. She then returned home to Elkins and enrolled as a student at West Virginia University graduating with a Bachelor’s Degree in 1970. While at WVU, she was a member of Kappa Kappa Gamma Sorority. When she was a freshman at WVU, she met her future husband, Jim, who was a third-year student in law school. Jim was immediately smitten by Kitty’s beauty and vitality. After Jim graduated from law school, he entered the United States Army to fulfil an ROTC commitment. Kitty and Jim became engaged to be married before he went to Vietnam. They were married on August 30, 1969, approximately one month after Jim returned from Vietnam. Kitty and Jim lived in Morgantown for a year to enable Kitty to complete her undergraduate degree at WVU. In 1970, Kitty and Jim moved to Charleston where Kitty became employed by the West Virginia Department of Health and Human Resources and Jim began the practice of law. After working for a few years, Kitty gave birth to her beloved daughter and only child, Katherine Bruce “Kat” Cooper. Kitty was an engaged mother and spent several years staying at home and nurturing and raising Katherine Bruce. During this time, Kitty was a member of the Junior League and was also very involved with Katherine’s activities, including organizing such things as brownie troop events. When Katherine Bruce got older, Kitty went back to school and obtained her Master’s Degree through Marshall University. She worked for a period of time with the Kanawha County Probation Department and later as a teacher and reading instructor in the Kanawha County School system from which she retired in 2013. During her working years, she also served on the Governor’s Committee on Crime, Delinquency and Corrections and on the City of Charleston Civil Service Board.

During her early years in Charleston, Kitty enjoyed socializing with family friends and she was especially adept at having dinner parties. She was very competitive and was a good tennis player in her younger years. Kitty possessed a vivid imagination and was strong-willed. She enjoyed theater and organizing events for her family. She was a fun-loving person and enjoyable to be around. She enjoyed reading, working cross-word puzzles and perfecting her skills as a cook. Upon retirement, and as her health began to deteriorate, Kitty took great pleasure in spending the evenings on the patio of her home with her Cavalier Spaniel, Penelope, watching the birds and butterflies and reading books.

Kitty was a great wife to Jim, mother to Kat, and sister to her siblings. Kitty often said that she was so lucky to have a beautiful daughter, Katherine “Kat” and son-in-law, John Schwartz. She loved and was extremely proud of her grandchildren, Coco and Asher Schwartz, who gave her so much joy.

Kitty will always be remembered by her husband, Jim, as the love of his life as signified by the following engraved letters on their wedding bands: ILYBTEWASS standing for “I Love You Beyond The Edge Which All Ships Sail.”

At Kitty’s request, she will be cremated with Barlow Bonsall Funeral Home being in charge of arrangements. Friends and family are invited to a celebration of Kitty’s life to be held on Saturday, November 19, 2022, at the Hale Street Center, 210 Hale Street, Charleston, West Virginia 25301 from 1:00 p.m. to 4:00 p.m.