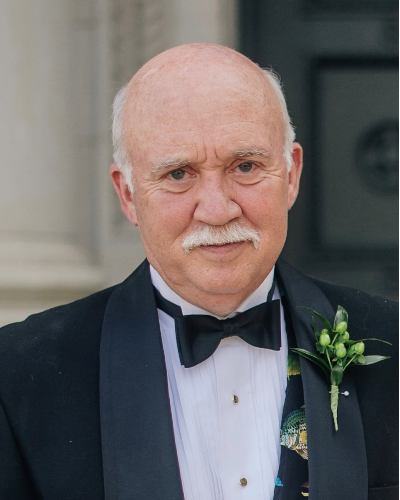 Gregory Douds Patterson of Charleston, WV, passed away peacefully, surrounded by the love of his family, on January 2, 2023, after a long journey with dementia. He was 71 years old.

Born on October 11, 1951, to a family deeply rooted in the coal mining industry, Greg grew up in Yatesboro, PA.  He was the first son born to parents of four daughters, and their close-knit community welcomed him with eager and open arms. Greg was active in sports and the outdoors as a child and graduated as the salutatorian of Shannock Valley High School in 1967. He attended Penn State, completing a B.S. in Mining Engineering (1974) and gaining extensive experience as an underground laborer through their co-op program. Greg moved to the Kanawha Valley in 1974 to work for BethEnergy Mines Corporation, a subsidiary of Bethlehem Steel, at their Boone County operations. There, he rose through the ranks at the #131 & #132 mines, eventually assuming the roles of General Mine Foreman and Superintendent. In 1986, he joined J.V. Services, an underground coal company headquartered in Danville, WV. While with J.V. Services, he earned his MBA from the University of Charleston (1987) before assuming the role of Vice President in 1989. During his time with the company, he oversaw their operations in West Virginia, Ohio, and Pennsylvania and was promoted to President & General Manager in 2004. In 2013, Greg began working for Norwest where he had the opportunity to travel to India on a mine consulting venture. Throughout Greg’s career, he was involved with the management of 47 different underground coal mines. Greg was the 7th generation of Pattersons to work in coal, and he was forever proud to see his son, Adam, join the industry. His commitment to the industry was evident in his membership in the West Virginia Coal Mining Institute (Former President), the Kanawha Valley Mining Institute (Former Vice President), Careers in Coal, and the Society of Mining, Metallurgy & Exploration. Greg’s storied career was capped with his election to the Kanawha Valley Mining Institute Hall of Fame in 2012.

Greg was an avid reader, outdoorsman, and golfer, a lover of music and college football (Go Nittany Lions), and an all-around great guy to know. He was never afraid to lend a hand or solve a problem, even if it meant driving from Charleston to Morgantown and back in the same day. He made himself at home in the kitchen just long enough to prepare delicious meals for his family and friends but never quite long enough to clean them up. Whether brave or a little crazy, he enjoyed many weekends alone with his kids in Tucker County, fishing and exploring. He loved to attend their games and concerts and continued his interest and support of their pursuits even after they left the house. Greg grew up fishing with his family in the Cook’s Run area of Pennsylvania’s Sproul and continued to travel there as an adult each spring for trout season, first with his nephews, then his sons, and on solo trips as well. Many will remember Greg for his calm and quiet demeanor, but he was an active member of Cosmo’s speaker’s club at Edgewood Country Club, and never shied away from presenting an award, introducing a speaker, or giving a toast. He will be remembered for his hearty laugh, his dry wit, and his statistically impossible hole-in-one shot on Edgewood’s number 3 in August of 2006.

Greg’s family is eternally grateful for his kind, loving, patient caregivers at Angel’s Touch in St. Albans, WV, and to Hubbard Hospice House for providing care and support at the end of his life.

We will honor Greg’s death and celebrate his life with services at Kanawha United Presbyterian Church at 11:00 a.m. on Saturday, January 14, 2023, Rev. Patterson Lyles officiating. The family will receive visitors one hour prior.

Condolences may be sent and shared with the family at www.barlowbonsall.com .

Barlow Bonsall Funeral Home, Charleston, has been entrusted with the arrangements.