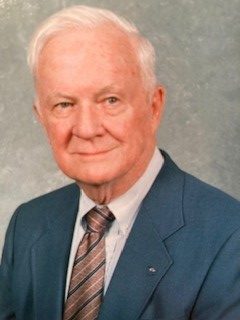 Lewis Frederick (Dick) Sutherland, Jr. died on May 28, 2021 at the age of 98. He was preceded in death by his wife of 67 years, Dorothy, on April 16, 2014.
The son of Lewis F. Sutherland and Sally Lynn Sutherland, he was born on May 17, 1923, was a lifelong native of Charleston, West Virginia, and a 6th generation descendant of early settlers of the Kanawha Valley. He was also direct descendant of veterans of the American Revolutionary War and the American Civil War. He was one of 6 children, and was preceded in death by his 5 siblings: Virginia Lynn Sutherland, John Lewis Sutherland, James William Sutherland, Ann Sutherland Jackson, and Thomas E. Sutherland.
He attended Charleston High School and was in the first graduating class of Stonewall Jackson High School, and attended Morris Harvey College. In 1942 at the age of 19, he joined the Navy and served until 1946. He and his 3 brothers served simultaneously in the US Military in World War II and returned home safely. He served on convoy duty in the North Atlantic for two years on DE-139, the USS Farquhar, on a mission of submarine search duty and escorting supply ships across the North Atlantic to Europe. His ship sunk the last German submarine of World War II on May 6, 1945, two days before the end of the war in Europe. After the end of the war in Europe, his ship was relocated through the Panama Canal to serve on duty in the Pacific.
After the war, at age 23, he went to work for West Virginia Heating & Plumbing Company in 1946 as an apprentice plumber. He rose to become President in 1978 and retired as President and co-owner after 44 years, in 1990. Under his leadership, the Company grew to one of the largest commercial mechanical contractors in West Virginia, and participated in the construction of many of the major office buildings, schools, and hospitals in Charleston, West Virginia, and throughout the state.
Dick’s personal efforts in 1969 led to the acquisition and installation of one of Charleston’s important landmarks, the clock currently at Charleston City Hall on the corner of Court and Virginia Streets. He acquired, renovated, donated to the City and installed this clock in memory of his business associate and mentor, John A. Shanklin, mayor of Charleston from 1959-67. The Clock is steeped in the history of Charleston. It was built by the McClintock Clock Co. and first located in front of the Charleston Trust Co. on Tennessee Avenue in 1907.
He is survived by his sons, Fred (Barbara) Sutherland of Philadelphia, PA., Jim (Cathy) Sutherland of Charleston WV and David (Jana) Sutherland of Frederick, Md. He is also survived by seven grandchildren and their spouses, Matthew (Allison), Mark (Ellie), Jacqueline (Steve), Allison (Shawn), Cristin (James), Emily and Will; three great grandchildren, Chloe Elizabeth Holstein, Katherine Lynn Pailthorp, and Daniel Frederick Sutherland; and also several nieces and nephews.
Mr. Sutherland was a life-long member of the Episcopal Church, and St. Matthew’s Episcopal Church since 1961, where he has served in many positions. Mr. Sutherland was an amateur historian of Charleston and West Virginia, an avid gun collector, and a lover of military history. He was a 65 year member of the Masonic Lodge #153 and the Scottish Rite Bodies and the Beni Kedem Shrine. He was most proud of the legacy he leaves with his service to our Country and his children, grandchildren, and great grandchildren.
The family will greet friends at a visitation at St. Matthew’s Episcopal Church, Charleston, on Wednesday, June 2, 2021 at 10 am. A funeral service will follow at 11 am, followed by a short burial service at the Church cemetery and a lunch reception at the Parish Hall, with The Rev. Kim Webster officiating.
You may send condolences to the family at:www.barlowbonsall.com

Barlow Bonsall Funeral Home is in charge of the arrangements.

In lieu of flowers, the family suggests that memorial gifts be made to the St. Matthew’s Episcopal Church Memorial Fund, 36 Norwood Road, Charleston, WV 25314, or to the charity of your choice.

Do not stand by my grave and weep,
I am not here, I do not sleep
I rest in the arms of Christ above
And I live in the hearts of those I love.