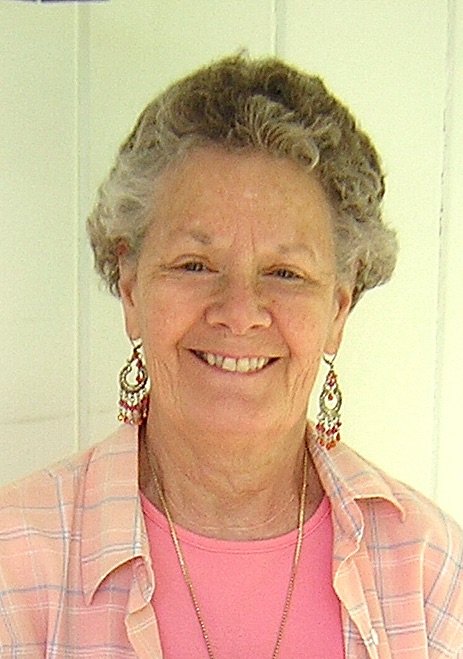 Born Sarah Anne Ten Eyck Carroll in Charleston, WV, on February 5, 1937, she was the eldest child of the late William Worley and Sarah Jane Biddle Ten Eyck. She graduated from Charleston High School in 1955, and received a B. S. degree in business education from Cedar Crest College in Allentown, PA, in 1959. She took some time to raise her family, and returned to work in 1978, working for the Kanawha County Clerk’s office for nine years (and served as Interim County Clerk in 1986), and later for the City of Charleston for seven years, retiring in 1998.

She met her husband, Joshua Vann Carroll, at Kanawha Players early in 1960 during a production of Inherit the Wind. They were married six months later on July 16, 1960. They traveled throughout the United States, Canada, Mexico, Europe, New Zealand, and Australia. Her favorite trip was to Greece in 2000.

Perhaps the highlight of her life was when she and her daughter Sarah participated in an archaeological dig at the ancient site of Morgantina near Aidone, Sicily, during the summer of 1983. Thanks to Professor Malcolm Bell and Professor John Dobbins for that special and wonderful opportunity.

Anne was diagnosed with Parkinson’s Disease in 2011 and exercised regularly with the local Parkinson’s exercise group at St. Matthews and with Rock Steady Boxing. She found great joy in punching things.

Anne wanted to thank Jamie Tridico (Advanced Physical Therapy) for her invaluable assistance, devotion, and leadership to all the people with Parkinson’s in the Charleston area. Her weekly free exercise class and Rock Steady Boxing helped with balance and self-esteem, as well as providing a special support group for those who participated.

Another special thank you goes to George Manahan for being the main organizer and coordinator of the Charleston Area Parkinson’s Support Group. Through his efforts and managerial ability, he has provided a network of support and community awareness for those with PD.

Anne’s flower garden was known to all her neighbors, and she enjoyed hours spent digging in the dirt. A special thank you to Parker Boggs for his invaluable help with her garden. Ron and Sue Eisinger were steadfast friends and catsitters.

Anne was very active at Kanawha United Presbyterian Church, where she had been a member since 1949. She was an Elder and Clerk of Session. She taught Sunday School and assisted for many years with Vacation Bible School. She was active in Presbyterian Women, having served as Circle Leader, President, and Moderator. She also served as president of the former Parkersburg Presbyterial, and was an Enabler and vice-moderator of Presbyterian Women in the Presbytery of West Virginia. She was presented an Honorary Life Membership in Presbyterian Women in 1993 by the women of her church. She was a longtime member of the Handbell Choir, was a Kanawha Forum volunteer, and served on the Building and Grounds Committee.

She is survived by her daughter Dr. Sarah Ellen Carroll and wife Jean Sirius of Oakland, CA; and son James Lewis and wife Marilyn Carroll and her three very special grandchildren Catherine Anne, Ethan Lewis Carroll, and Mary EllenMay Carroll of Canal Winchester, OH. She is also survived by her brother William B. Ten Eyck of Beaufort, SC. Her faithful family in North Carolina, are Nancy Jane Carroll and John Brooks, Caroline Long, Frank Lewis and Paula Bromley, Pattie and Lloyd Winslow, and Nan-Et Charles. Also surviving are her Biddle cousins, Joe and Kathleen, John and Trudy, and Andy and Margie, all of Huntingdon, PA; El and Sheila McMeen of Sparta, NJ; and Townley and Bob Neill of Albuquerque, NM.

If Anne made you a friend, you were her friend for life. She had numerous friends across the country, and stayed actively in touch with her high school graduating class and college alumnae. She still had friends from grade school too. Her last outing was in May, when she organized a gathering of her closest local friends, Betty and Tom Damewood, Lucy and Jay Kauh, Pat and Chuck Moyers, and Ann Patterson. That meant the world to her.

Her friend Connie Jones organized care for her after Vann died, and Anne’s special caregivers included Hannah Faegre, Sue Price, and Debbie Sigmon. This team made it possible for her to stay in her home as long as she did, and to take a couple of trips in the last few years of her life.

A service to celebrate her life will be held at 3:00 p.m., Saturday, August 28, at the Kanawha United Presbyterian Church with Patterson Lyles officiating. The family will greet friends in the Rugeley Library at the church following the service.

In lieu of flowers, it is her wish that donations be made to the Charleston Parkinson’s Support Group, 222 Capitol St., Suite 404, Charleston, WV 25301.

She arranged to donate her body to the WVU Medical School, because it was her nature to be of service to others.

On-line condolences may be made to: www.barlowbonsall.com