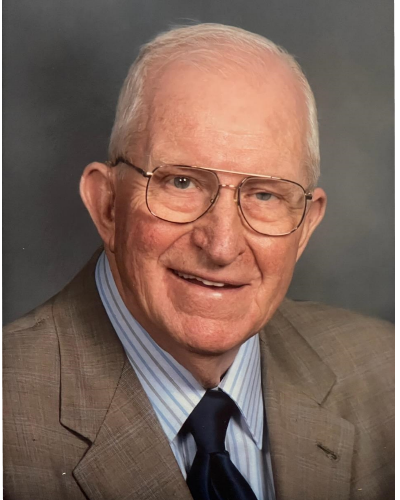 Richard Francis (Dick) Golden, 97, of Charleston was born in Cumberland, Maryland, on July 29, 1925, and peacefully passed from this life on January 3, 2023. He was a beloved father, grandfather, great-grandfather, respected co-worker, WWII veteran and a faithful, lifelong Presbyterian. He and his wife, Belle W. Golden (1919-2005) joined First Presbyterian Church in Charleston, WV, in 1954. There, Dick served as a deacon, an elder, trustee, treasurer, and commissioner to the Presbytery. For many years he was a Sunday School teacher and a member of the former Covenant Sunday School class.  He was a mentor to many.

Dick and his late wife, Belle, were married for 57 years, meeting in Cumberland after WWII, and moving to Charleston in 1951. They loved to dance and were active members of the Passepied, University, and Latin Dance Clubs. They also loved to travel all over the world, with memorable trips to South Africa, Egypt, Europe, Brazil, Greece, and throughout the U.S. Dick and Belle traveled with their grandchildren, instilling in them the love of travel and learning.

Dick retired from American Distributors, Nitro, WV, in 1990, as an operations manager. Prior to that, he was president and general manager of West Virginia Tire Supply (Mohawk Tires), where he worked for 30 years. He was a past president and founding member of the Associated Supplier Council (now Ascot), which is a nationwide tire industry trade association.

Dick was the President of the 1943 Senior Class of Fort Hill High School and a member of the National Honor Society.  Before enlisting in the Navy, he attended Duke University in Durham, NC. During his three years in the service, he had a position as a commissary inventory manager in Shanghai, China and was also assigned to the USS Copahee, stationed in the Pacific theater. He is truly a member of the Greatest Generation.

Dick is lovingly remembered for his incomparable knowledge of geography and expertise at crossword puzzles, his homegrown sense of humor, unfailing patriotism, and never-ending friendliness; he could have invented the phrase, “never met a stranger.” He was a consummate gentleman.

Services for Dick will be 2:00 this Saturday, January 7th at First Presbyterian Church, 16 Leon Sullivan Way, Charleston, WV, with Rev. Dr. William C. Myers officiating.  Friends may visit with the family one hour prior to the service at the church.

A private family service of Committal will be held prior to the service at Tyler Mountain Memory Gardens.

Condolences may be sent and shared with the family at www.barlowbonsall.com .